Respect Due to The Beat Magazine by David Katz, from Riddim Magazine (Germany) 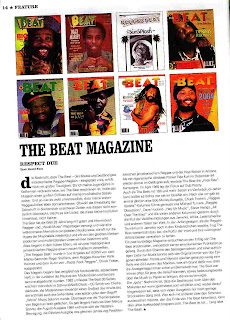 Respect Due to The Beat Magazine by David Katz

It was with great sadness that I learned of the demise of the Beat magazine, the USA’s longest running and most consistent reggae publication. Since I spent my formative years in California, where the magazine was based, the Beat formed a great part of my musical education from the early 1980s and it was perhaps inevitable that some of my first published works of reggae journalism would feature in its pages. The Beat was something I, and so many others like me, always read avidly from cover to cover, and although the cessation of its print form is not particularly surprising in these times of economic strife, it does not make the absence of the Beat any easier to bear, as the community spirit and devotion to the music that always drove the zine are unlikely to feature in any other printed entity of the near future.

In case you are not already aware, for the last 28 years, the Beat has provided high quality reggae and ‘world music’ reportage that was often authoritatively informative. In a climate where the global music press is increasingly ruled by homogeneous name-brand product, shaped by multinational corporations driven by greed, the Beat was the refreshing antidote to the mindless consumerism and spineless ineptitude that saw other publications regurgitating major-label hype.

The story begins in the early 1980s, when a few pioneering radio jocks were bringing the intense sounds of Jamaican reggae to a whole new audience. In Los Angeles, the "Reggae Beat" was broadcast on KCRW, presented by a select team that included noted Marley aficionado Roger Steffens, his knowledgeable partner, Hank Holmes, and another learned cohort, Chuck Foster (who would later write the excellent book Roots Rock Reggae). The show was eventually syndicated, making a huge difference in the general exposure of reggae in the USA.

In the show’s early days, the broadcasters had their very own ‘Minister of Information,’ the astute and personable CC Smith, who announced upcoming events and fielded phone calls; by 1983, she was presenting the "African Beat" program, the first radio show of its kind in the region.

Legend has it that the Beat magazine was born as a photocopied free-sheet, featuring the playlists of the radio broadcasts and noting upcoming concerts. By 1982, it had become a fully-fledged 30-page magazine, appearing every other month in black and white newsprint, with CC Smith as editor-in-chief and the radio hosts providing much of the content. It soon became the Reggae and African Beat, the first publication to seriously explore what has become known as ‘world’ music. These early issues had incredible content: for instance, there was Doug Wendt’s 1983 interview-based feature on Lee ‘Scratch’ Perry, who made the cover nearly 15 years before the Beastie Boys brought him major US fame. There were also extensive features on Marcus Garvey, while the August 1984 issue was devoted to the Rastafari movement, and October 84 looked at the connection between Jamaican reggae and the Hopi nation in Arizona; that December, the magazine launched a campaign to free Fela, Nigeria’s radical Afrobeat pioneer, while April 85 focused on dub poetry.

As the Beat became a 100+ page glossy mag, the standards remained high: each year produced a tribute issue to Bob Marley, Chuck Foster’s "Reggae Update" column remained the most comprehensive guide to the sea of reggae releases that are regularly unleashed; Michael Turner’s "Reggae Obsession" was always informative, as was Dave Hucker’s "Hey Mr Music," Steve Heilig’s "All Over the Map," and the other columns detailing various African, Latin, and Caribbean sounds, including the regular pages devoted to dancehall.

In the early days, for those of us that had not yet traveled to Jamaica, the Beat was part of the process with which we could better understand the culture of the island and the thoughts and beliefs of its most noteworthy performers. And although a few other short-lived magazines tried to emulate the Beat’s success, no publication in America ever came close to it. The Beat remained apart from the rest, with the kind of homemade touches and genuine affection for the music that was covered in its pages, which is so sadly lacking from many of the other print entities of North America and Euorpe. The Beat never worried about trends or hipness or the fads of the marketplace, though securing the necessary advertising to keep the ship afloat was always a problematic process. Editorially, the Beat also kept her pages open to those with a burning desire to put something meaningful in print about the music that moved them.

The ‘good’ news is that back issues are still available by mail order, so get ‘em now while you still can. There is also a tributary blog at: byebyebeat.blogspot.com. What else is there to say other than, The Beat is Dead…Long Live The Beat!

-- David Katz.
Posted by The Minister of Information at 1:32 PM