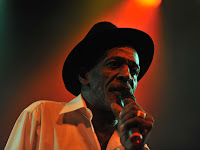 REGGAE singer Gregory Isaacs has died.
The singer, 59, passed this morning after a long illness.
He died in London.
Earlier this year, Gregory Isaacs' road manager Copeland Forbes stated that his charge was, "in the UK doing some medical tests. As you all know, he had some problems with his legs from last year which resulted in cancellation of tours, and in the last 12 months he had a very hectic year travelling all over the globe doing performances".
Isaacs has been a constant presence on the reggae music scene for some time. The singer has released a number of hits including Night Nurse, Tune In, My Number One, Love Overdue, Rumours and The Border.
Posted by The Minister of Information at 4:18 PM