Ironically, the terribly sad news that The Beat was ceasing publication came just as I was unpacking two boxes of my Beat collection that had languished in storage for nine years. I subscribed in 1984, when I returned from several years living in Central America. During my work there, at a time of intense historical events, I was sustained by cassettes of African music sent to me by a friend in England. As passions often lead to obsessions, I began devouring African music in all its guises (including reggae, cumbia, all things Cuban, the blues. . . the gamut), and The Beat was my guide. When a new issue was due to arrive, I could almost taste it, and I looked for it in my mailbox with daily hope. When it arrived I read it cover to cover, reveling in the writing of so many talented experts. The next day I would go to the record shops, with a new list of essential music to find. 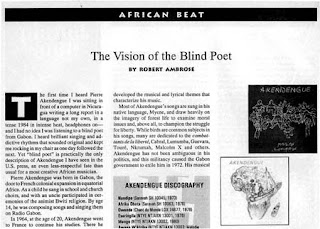 The Beat became even more important to me when I moved to Alaska, leaving behind the rich musical ambiance of San Francisco for a much more austere cultural environment. After 10 years as a subscriber, I sent CC a writing sample and was astounded when she offered me the "African Beat" column. To write alongside Dave Hucker, Bob Tarte, Chuck Foster, Roger Steffens and many others?! It was a great privilege and an exquisite pleasure, for the seven years I was able to contribute. Thank you CC for the opportunity, which provided me with so much, and for the incredible work that you, Roger and Carol did over the many years. The Beat was the physical product of our love for the music; I like to think that The Beat community will endure into the future, continuing to share that love.

Posted by The Minister of Information at 4:44 PM