All Things Must Pass, sang my favorite Beatle long before he did so himself. That seems true, but it does not make letting go much easier. 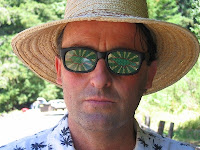 The BEAT was very good to me, as it was to many music lovers. First, from the start the magazine taught me much about what to hear and why. Then, when I started writing for the publication, it enabled my music addiction just when it was threatening to become a hazard.  I'd become obsessed with reggae while in college, and collected what few Marley, Tosh, Spear, Toots, Bunny, Cliff, Heptones, and the few other LPs one could find in California then.  I even wrote a few pieces on these artists and their amazing concerts for school papers.  The gold standard for a publication on this music was The BEAT, though, so on a whim I mailed something in.  To my surprise and delight, it was accepted.  Next I knew I was doing features, festival and recording reviews, interviews, and eventually a column with no borders. Even my often-blurry photos sometimes showed up in the pages. My musical horizons broadened, mostly due to the other writers and editors. CDs poured into my mailbox. Promoters eagerly invited me to concerts, and backstage. I wound up meeting and spending some enlightening and enlivening "quality time" with all the reggae legends named above and many more, plus figures such as Gilberto Gil, Lee Perry (I think), Carlos Santana, Fela and Femi Kuti, Milton Nascimento, Ali Akbar Khan, Zakir Hussain, Mickey Hart, King Sunny Ade, Les Quatre Etoiles, Baaba Maal, Ijahman, Joseph Hill, Bob Andy...and many more from all over the world, sometimes in their home arenas.  No borders indeed.

I don't recall any artist, no matter how big, turning down an interview request.  They (OK, and/or their publicists) knew the value of The BEAT, even though, or sometimes because, those of us who wrote for it had other "real" day jobs and thus did it for love (OK, and all those musical perks).  We were not hired de facto flacks for anyone and thus could call it as we heard it.  As reggae seemed to decline from the highest consciousness to some of the lowest, we could lament that in print (and even receive a threat or two in response, confirming our stance).  For old-timers, reggae, salsa, funk, and hell, jazz and rock and roll too all might have seemed to have peaked long ago.  Thus in more recent times much of what I liked most seemed to be re-releases of great earlier sounds.  So be it, even if the overall tenor of the magazine began to be a bit retro, we were able to pick out new gems each year, and I will miss the usefulness of our annual "Best of" lists, which guided my own listening through the years.

I was honored to be part of the BEAT crew for almost two decades. When one's words are published, they so often just go out into the ether, and you never know who, if anyone, read them, and what they might have thought.  But so many times, at festivals or even in a local record store, some reader who learned my name would say "I've been reading your stuff for years!" -- and some of those people even went on to say something laudatory.  That made it all worthwhile.  As did those who rolled their eyes at some goofy thing I'd quoted or written myself --and that especially includes the Dreaditor herself, CC Smith, without whom we would all be musically poorer indeed.  So, my sincere gratitude to her and to Roger Steffens, and to everyone else who wrote, read, and especially played through all those years.  It was a pleasure and a privilege to be included, appreciated, indulged and even attacked. Like everything else, music is ephemeral, but in some form or another, The BEAT goes on.

Steve Heilig
All Over the Map, now Off The Map
Posted by The Minister of Information at 1:52 PM