In the beginning, there were no computers. No laser jet printers, no fax machines, certainly no such thing as the Internet.

Fifteen years ago, the first issue of The Beat, then called Reggae Beat, was a single 14" piece of paper, with one photo and four ads sold for $20 each. It cost $80 to print on one of those little instant-press offset machines that were more common than copiers in 1982. I typed up the copy on my IBM Selectric and reduced it on the copy machine: It consisted of a little "Forward," a report on the UCLA Reggae Cultural Festival, Hank Holmes' "I&I Works," Roger Steffens' first "Ras Rojah's Reggae Ramblings," a listing of local reggae radio programs and record stores, and Bob Steinhilber's "Collector's Corner." Bob was the initial art director and introduced me to my first halftone. He also designed the highly rootical original logo.

The newsletter, as it was then known, arose from Roger and Hank's "Reggae Beat" radio program on KCRW-FM in Santa Monica, where I answered the telephones and prepared the calendar of concerts, clubs and events, taking on the role of "Minister of Information." Roger had come up with the idea of starting a mailing list for the show, putting out the call on the air one Sunday for people to send in their names on postcards. The next week, we had 200 names.

"Roger," I exclaimed, "what should we send them?"

Prophetically, he replied, "Oh, you'll think of something."

The second issue, dated July 1982, took on booklet form, with the three sheets of 14" paper folded in half, giving us 12 pages. Bob drew the Mutabaruka  cover, and we'd also acquired a staff: Maidah Bey had come aboard to sell ads, and Brock Adler volunteered  his Kroy type machine to set headlines. Over the next few months, every time we'd publish an issue, a great team of folks would stop by the radio station during the show to collate, fold, staple, stamp and address the newsletter.

Production had also become a collective effort, as a bunch of us, by now under the art direction and patient guidance of Donna Tarzian, would gather at someone's apartment after work to cut, paste, and set up the pages for printing. It wasn't until a year later that we discovered typesetting, but by the summer of 1983, we had evolved to full magazine size, with a color cover (Lee Perry, cartooned by A. West), and a cover price: $1.00. The masthead's burgeoning list of participants now numbered about two dozen; Nick Wolf was now in charge of ad sales, Annie Evans was the assistant editor, and we were all learning what it took to put out a magazine. The brave new world of computer dawned in 1986. We moved into our first office, finally getting the business out of my apartment, in 1990.

(Continued in next posting. A picture of the first issue is reproduced below in Bob Steinhilber's post.)

Cartoon, below, by Jah Bizarre, "Dread Lion Looks at the Team on Reggae Beat" published in Reggae Beat #5, Nov. 1982, depicts Roger Steffens on air at KCRW-FM (center), CC Smith at lower left, board op Jim Milne and DJ Hank Holmes lower right. At top right is a vignette showing volunteers collating and stapling the newsletter at the radio station. 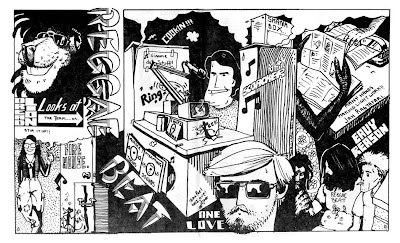 Posted by The Minister of Information at 1:51 PM